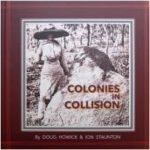 Concatenation: The taking and merging of two separate themes into one; a series of interconnected or interdependent things or events

History, it has been said, is written by the victors thus allowing the enshrining in the narrative of their particular perspective on protagonists and events; Tudor writing on the War of the Roses is arguably the classic case.

Closer to our own times, the “history wars” of revisionist historians debating early colonial settlement have provided ample opportunity for both sides to display their biases in their interpretation of events. All such interpretations, developed with the benefit of hindsight and privilege, necessarily draw upon an earlier written or oral record and hence are in themselves derivative; in strictly legalistic terms they are merely hearsay albeit dressed up in academic respectability. Seldom are the party to the events they record and interpret.

Doug Howick and Ion Staunton call their book a chronicle of the “Termite Wars” rather than a history; the human participants waging this war, from aboriginals through the early settlers to the present day, are the termiteers (incidentally a term the authors have formally trade-marked); their antagonists are that most evolutionary successful group of insects the Isoptera, whose armies are composed of some five family divisions organised into 27 brigades of genera and innumerable battalions of species (depending on the taxonomic fashion of the moment); the soldiers and workers in these highly organised armies are as uncountable as they are effective in carrying out their ecological function of recycling wood.

Doug and Ion have been active participants over many decades in this on-going battle protecting man-made wooden structures and forests against termite attack and now, in retirement, have been able to chronicle this battle from experience gained throughout their professional lives.

Doug was an entomologist with CSIRO and, in the latter years of his career, was National Executive Director of the Australian Environmental Pest Managers Association (AEPMA), and remains a life member of the International Research Group on Wood Protection.

Ion started out as an industry technician, became a TAFE NSW teacher and wrote the first textbook on termite control in 1961 with Phil Hadlington of the Forestry Commission of NSW for their industry training courses; other followed. He managed the early industry associations in NSW and has patented his TermiteTrap.

Both authors bring to this book a wealth of personal experience of termite biology and management as well as an grasp of the developments that have taken place historically since the earliest crude attempts by the first settlers to control an insect pest which was entirely foreign to their British experience.

this is no dry “Official History” but a very lively story, laced with the odd witticism that lightens the tone of the text, about the people over two centuries who have led the charge against their new-found foe and the nature and proclivities of that itself. For readers familiar with Maurice Maeterlinck’s somewhat ponderous Life of the White Ant, first published in 1927, there will be some surprises in this new book, reflecting as it does nearly another century of research.

The vignettes on termite biology make for easy reading for non-biologists, aided by the large if somewhat unusual format (the hardcover book is 26cm x 26 cm) copiously illustrated with first class photographs of everything from a discarded horseshoe in a termite mound to the Christo-like drapery of the Queensland Parliament Building Brisbane in June 1979 in preparation for methyl bromide fumigation for drywood termite infestation (caused by Cryptotermes brevis) by Rentokil – termites introduced by the American Army during WWII: for those involved in this operation, certainly a once in a life-time experience and well documented here.

The Queensland Parliament building in 1979.
(Photograph by Ian Bevege)

The dramatis personae featured in the book are far too many to list here but the contributions start with one Henry Smeathman in 1781 with his seminal paper on African white ants sponsored to the Royal Society by Joseph Banks, and progress through such pioneering scientists as Charles French, Walter Froggatt, Eugene Marais (in South Africa), Gerald Hill and Frank Gay to the entomologists of the 21st century such as Brenton Peters, Bob Eldridge and Jim Creffield.

On the practicalities of termite control, the first real breakthrough came from Bill Flick, farmer from near Lismore who, from observing the of bees on his farm, established the principle of killing termites in the nest by exploiting their feeding habits. He developed and patented the first really effective termiticide and went on to establish Flick and Company, now an “Aussie icon” with its “One flick and they’re gone“.

His contemporary Barney Houghton while serving in France in WWI observed the use of pyrethrum flowers being used with chalk and borax to control insects and brought this technology back with him, eventually establishing another iconic pest control company, Houghton & Byrne, that was taken over by the UK firm Rentokil. Jock Whiteman also started up in 1923; his operation morphed into Amalgamated Pest Control.

All this work between the two world wars was underpinned by sound research into termite biology on CSIRO, in systematics by Gerald Hill and biology by Frank Gay. After WWII with many more operators joining the industry, the need for better training and industry supervision and regulation became apparent. Phil Hadlington of the Forestry Commission of NSW set up courses in Sydney leading to accreditation; he was joined by Ion Staunton who also established the germlings of the industry associations set up in NSW to get the house in order.

While all this was going on, research into termites in forestry was also gathering pace, particularly after WWII. Termite degrade of mill logs (particularly eucalypts) received more attention and the spectacular attack of tropical tree plantations in the Northern Territory by Mastotermes darwiniensis led to the development of Mirex baiting techniques and extensive field testing of timber species susceptibility; Tom Greaves, Bob Fox and Frank Gay were closely involved in this work.

Turning to the structure of the book, it divides some 230 years chronologically into eight periods starting with 1788-1800 and finally with 2000-2018. Each time-digest discusses developments in understanding termite biology and managing termite damage, and the often people involved. The whole into a virtual vade mecum on the biology and social history of termite management in Australia – most appropriate for what is arguably the most social of insects.

There is a most comprehensive bibliography covering several hundred references, into themes, for those wishing to delve further.

Highly recommended to all those with an interest in the history of biological science and of industry development in Australia as well as forest historians; there is something for everybody here.

The authors were determined to produce the book in Australia and production is first class: they used paper “not eaten by termites”, clear large font text and excellent illustrations, printed and by Kingswood Press in Underwood, Brisbane.