This is your chance to own a piece of History

This is the history book of the termite wars in Australia. There hasn’t been a book like it and there probably never will again.

Captain Arthur Phillip led 11 ships with soldiers and convicts from England to Sydney Cove to set up a new British colony on the great south land.

Other colonies were already there: colonies of termites.

The first collisions occurred about six months later in 1788 when convicts tried to shift a crate of calico and “…heaved to lift it. The wood crumbled in their hands; the top of the crate lifted away from the bottom that disintegrated into paper-thin shards of timber and a seething, scurrying mass of insects.   Like white ants…”

Later… the settlers followed the explorers into new country where termites were waiting to devour the timber in their humpies, sheds and homes: “…the termites could hardly believe their luck as timber houses with fireplaces appeared. To them, there are few things more welcome than woodheaps in Copto country.”

No matter what humans did about them,  “…the bloody termites kept coming” 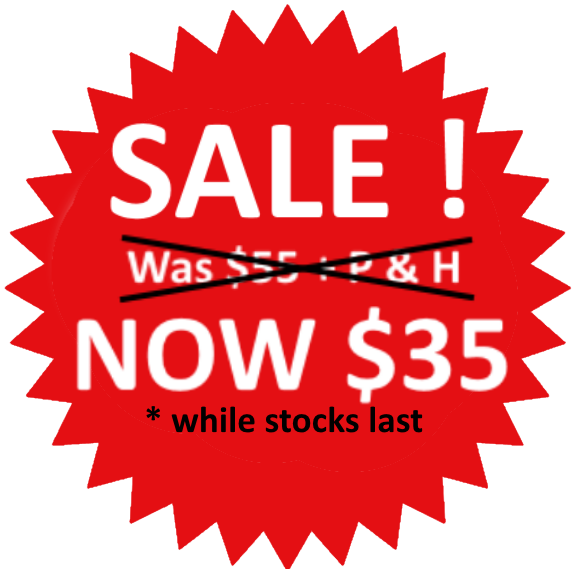 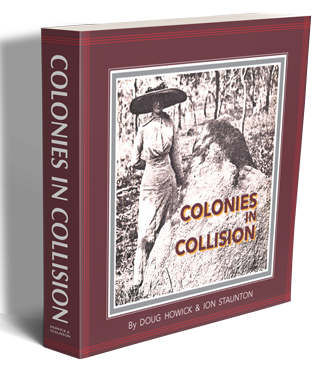 It was the colonists against 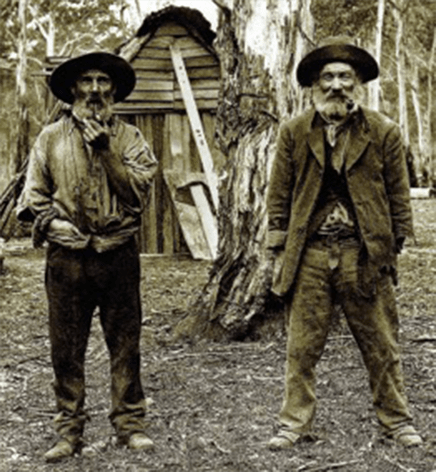 (Page 25) This pair of charmers were cedar-getters of the 1800s. They went to the best parts of the country and settlers followed. The termites welcomed them all. Photo: Frozen in time Gallery

Get the book now

The aboriginal people didn’t war with termites because their mia-mias and gunyahs were usually light tree branches; hardly of interest to Coptos and the other termites. But the white people were much more than indignant when termites ate their slab walls, flooring timbers, etc. The termites had the upper, and lower, hand for the first 127 years of the colony. In 1915, William Flick inflicted (a most appropriate word) the first defeats on termites and the termite service industry germinated. The story traces almost forgotten names: Barney Houghton who became the industry’s first millionaire and his company which was eventually bought by Rentokil; the nine Smith brothers who moved from Tasmania where they’d never seen a termite, into Victoria, SA and WA. Their sister married a Bonney in NSW. These became household names in pest control from the 1920s to the 1960s. Up in Queensland, Jock Wightman shared an office with Bill Flick because “…Jock wasn’t into termites and Bill wasn’t into cockroaches so the arrangement suited both of them.” Jock was the father-in-law of Darcy McCarron, grandfather of John, Marshall and Andrew McCarron who set up Amalgamated Pest Control. The twist in the tale is that about 90 years later (in 2016) Flick Anticimex bought APC and with that merger, people from both companies share office space again.

Termites were such a major problem that Governments became involved in studying them. At first there were no Australian entomologists so Government botanists and zoologists were encouraged to sort out the different species. They also noted differences in feeding and nesting habits and conducted experiments to determine why various treatment methods would or wouldn’t work. 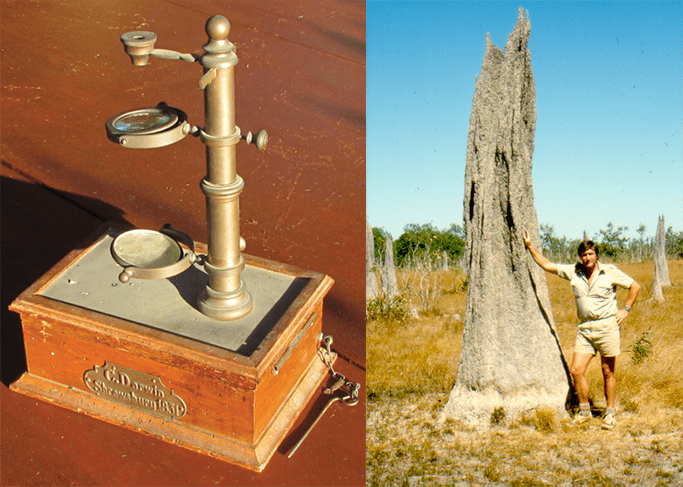 This is the type of microscope the early scientists peered through. Co-author Doug Howick, then one of those government scientists in the field preparing to push over an Amitermes meridianalis mound near Darwin.

Governments had a stake in termite control because termites were eating their property too, so there’s the story of amalgamated fighting all those termites trying to sabotage railway bridges.

The days of reckoning are recorded after the most destructive armed force in the world (from the USA) brought the most destructive dry wood termite in the world (Cryptotermes brevis) to Brisbane during World War II. It surreptitiously spread from Brisbane to Bundaberg and beyond until Rentokil won the contract to fumigate 39 buildings in 1979. The signature red and white fumigation sheets draped over the Queensland Parliament House earned it the title of ‘The Biggest KFC Store in the World’ 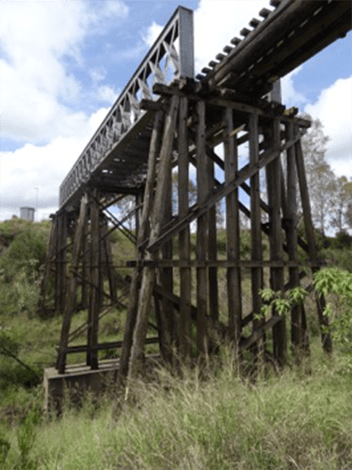 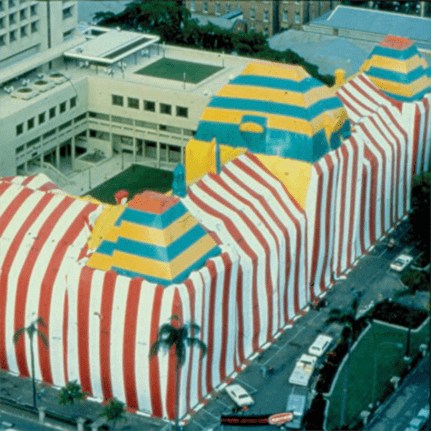 (Page 145) The Queensland Parliament house masquerading as a KFC store in 1979 (Under fumigation by Rentokil).

The more recent developers of physical barriers, Termimesh, Granitgard, Kordon, Termiglass, Term-Seal and others followed Lysaught, (the galvanized ant cap people from around 1900) with products of increased technological sophistication.

Arsenic dust dominated from 1915 until the 1950s when the organochlorines became the chemical choice for the next few decades. Dusts made a comeback when Bayer’s Intrigue and BASF’s Termidor Dust again put some focus on eliminating colonies rather than relying on an insecticidal barrier. Then came baiting. Dow started it, Exterra and others joined in the quest to affect termite colonies by getting workers to transfer IGRs back home. It is just a variation on Bill Flick’s original strategy really.

The book explains how the ‘snake oil’ purveyors of promised termite eradication in the late 1800s morphed into the well trained technicians of today. Those who countless hundreds of thousands of times have been welcomed into houses by distraught homeowners, ushered quickly to scenes of splintered timbers, scattered bodies and destroyed dreams of a happy home… because the homeowner trusted this technician and this company to “…know the termite’s biology and habits, its preferences, the likely best options to eliminate the colony it came from and how to defend the home from attack from other colonies which might be developing nearby.”

Some think history is boring but history keeps happening. Thoughts and actions become stories and most people enjoy stories. 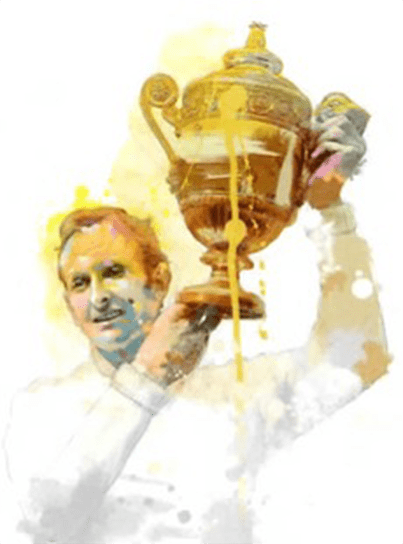 (Page 33) Termite mounds were the base for many tennis courts in rural Australia in the early 1900s and onwards. Termite mounds were soil particles held together by termite saliva and, when crushed and rolled it stayed put. Rod Laver and Evonne Goolagong were just two champions who learned to play on “ant-bed” courts. Photo: The Australian Magazine

This is a comprehensive story of humans in the battle to save wood in their structures from termites. Yes, there are facts and dates. Yes, there are short passages of that ho hum stuff but you’ll stay involved as you connect the dots and see how the past has shaped the present.

Roland Hovey who wrote the Foreword, says he reluctantly agreed to do it… he certainly didn’t want to read ‘another bloody book on termites’ after his previous 45 years of termite warfare. But to write a Foreword, you’re supposed to read the book first. After a few days of procrastination, in the wee small hours of one morning, his wife came out and asked if he was ever coming to bed? He had become so involved in this story that he was taking sides and was even starting to hope the termites would win.

(Page 126) Co-author Ion Staunton with Phil Hadlington OAM who produced the first formal TAFE courses which brought science to commerce in 1956, and John Cheadle who began as a Flickman the same day as Ion in 1957, went on to become the Qld Manager for Rentokil before setting up his family company Arrest-a-Pest

This is your history.
Though humans are winning, the war is still on
and colonies are still colliding.

If a person who lives to climb mountains is a mountaineer and you’ve heard of musketeers, auctioneers, profiteers and engineers, you’ll get the ‘ideer’. You are probably a Termiteer and didnt realise it! Termiteer® is a registered Trademark and the publisher’s name so you can’t promote yourself or change your company name to The Termiteers, etc., but we are happy for you to describe yourself as a termiteer —just as mountaineers use their word. When you read this book you’ll realise you are in highly esteemed company.

Get the book now 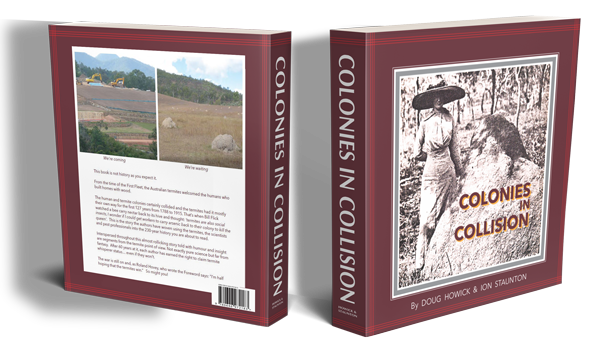 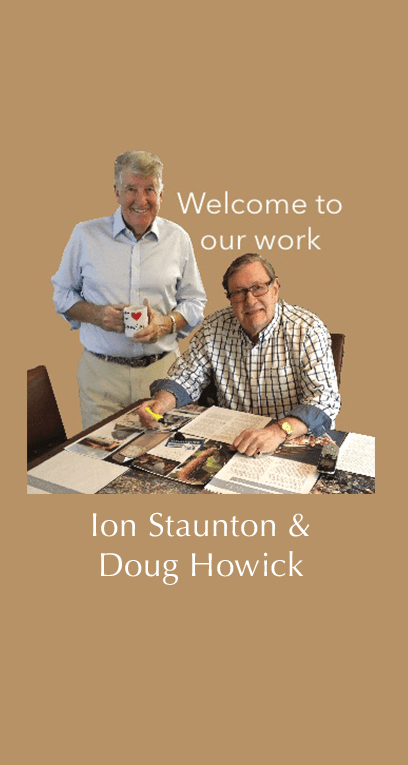 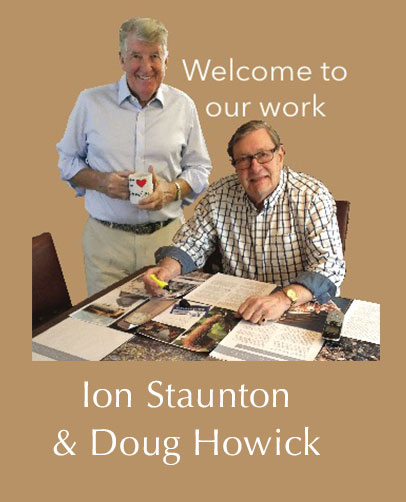 Doug Howick and Ion Staunton are both ex-leaders of the National Association. Having experienced and observed of the transitioning of the termite service industry over the past 60 years, they delved into and researched those earlier days before the records disappeared or no one alive knew where to look. As young men in their twenties, they met, conversed with and knew many of the old-timers who told them stories of the generations before them. Three years in preparation, the stories are now in print, told with accuracy, humor, and insight.

One more bonus: there are over 600 scientific termite papers listed in the appendices plus suggestions on how to easily download most of them from the Internet.